In bed with Parna on my knees licking her paw and then rubbing her face. The only sound is me tapping away and the portable heater clicking on and off. I am sneezing and sick, poor me. I guess it is a cold, stuffed nose and feel drab and down a bit.

Daisy came to visit and cheered me up. I got a hand written letter from my old friend, Gord.  I have known him a long time but he is also chronologically old. Older than my father. We were good friends while I lived in Manhattan, he came to dine alone where I worked and that is how we became friends. He did eventually ask me to marry him way back then. I told him no, of course, I have no interest in him that way. I couldnt read his writing in this letter, and planned on not killing myself trying. When Daisy showed up, I showed her as a laugh, to show her how garbled it was. I have always had a hard time reading his hand writing and now it was even more difficult. Daisy started reading it. She could make it out, which astonished me.

Gord apologized for not writing sooner and let me know he sent me a letter in July asking me to marry him, but I must have not got it because I didnt reply or comment. No, I didnt get it.

Oh dear. He is an acute care facility, he is out of his small apartment, where he had moved to years ago in Connecticut. He has no cell service or internet, so I have been sending him greeting cards that I had made out of my photo's and painting images with quotes inside. His daughter wrote me to say he is deluded and having a hard time, being mean and confused about things.

I cooked some potatoes and now took one and added some frozen chicken broth and will eat that. I dont much feel like chopping anything. I need to eat more leafy greens but I dont want to. Why is it that all the tasty easy things are bad for you, like bread. I love bread. Well, I decided to chop up a carrot, a piece of celery, put pants on and went out to the garden to get some arugula, sage and parsley that is still green and not frozen. I have some turkey kielbasa I got at the butcher and chopped up some of that. I added fresh garlic, turmeric, 3/4 of a fresh lime, pink salt, freshly ground black pepper, some Thai fish sauce (made with anchovies, supposed to be good for you, tastes cool) I took a couple of small pieces  of a nice cheese bread out of the freezer and toasted them under the broiler, buttered them. I got the bread from one of the women at my Paint Night and now I have a delicious nutritious dinner. My cat has gone into he basement where she wo
nt be disturbed but I wish she was here with me instead.

I started this post on Sunday, I am going to finish it now:

Early Sunday morning. I woke up covered in sweat. I hadnt had a shower for a couple of days, the sheets were a week old. I went back to sleep but couldnt really stay asleep so I jumped up and had a shower and am doing the laundry, my sheets and blankets. Time to get ready for my show on Dec 6.

Get new paintings up and take the ones that I showed last year down. I am curious how this show will go. It will be different people. One little group that came last year was people I worked with putting up Christmas decorations. I didnt do the Christmas decorations this year, I wasnt invited back and I am not sure why.

But I did. She was a jerk to me and I snapped at her one day, "Why is it that pretty much everything that comes out of your mouth to me is mean and snappy?" She acted all "Moi?" 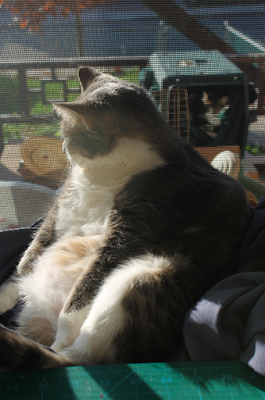 I thought we kind of went over a hurdle. We both shed a few tears. She told me all about her ailments, and she has many. I softened toward her, I felt warmth for her and the struggles she was facing. maybe she heard me tell someone "I didnt want to do this this year, I said no, but Lolita had scheduled me and persisted. She would walk around and around and when she came upon us and we were chatting she would lose her mind with a flinch we would all hush. Her main right hand Mia would hush us. She was the most expert about dealing with Nataja. Mia told me more than once that she never wanted to do this ever again, her shoulders were slumped, her head slightly back, her mouth down and dragging, like we all felt. The fumes of the fake shit riddling into your organs, laying glitter dust to process back out of my body some way, if possible, one hopes.

I came with scarves to cover my mouth and nose, and gloves--we all used gloves but no one else covered their face. I took it off though because it is hard to breathe with it on.

Or maybe it is because when Gituku and I went downtown to pick up our cheques--she knew we were coming but she went out and didnt answer her phone. Gituku was pissed. Then it happened again, yup, we set up to go downtown and get our cheques and she wasnt there again, didnt pick up her phone again. Then the plan was she would come here.

She was going on about how she makes enough money on the job to cover her bills for the year, "How about a raise" I said. I asked Mia before if she got a raise and she said she was a lemming, which meant she was too scared to ask.

I was not invited back, and I bet they get a raise, what a bitch. I like to come here and say so. What a bitch.

Maybe I did something? I dont know. I hate that job. Nataja bought a small painting at my show last year, and I wish I had it back. I dont want it in her house.

I wonder how the Starving Artist sale will go.

I am in bed wishing for some nice thing. I know I sound like a bitter bitch. I dont feel like apologizing either.

Posted by Ciffyvanlooadoo at 1:16 PM