Last year I sold this painting to a wonderful woman, named Trish, who came to my Christmas show. She paid installments, which is always nice to get a bit of dough. It was the most expensive and biggest painting I sold at that show. It means a lot that she bought it as she works at a butcher, making tasty soups and all sorts of things she does there. Her boss, who was at my show as well, selling her wonderful bottled sauces Cucina Mirella, told me she would top up the difference of the painting, so she could give it to her at her ten year anniversary party of working for them at Butcher By Nature, this past Saturday. I will get trade which is great. Being as broke as I have been I havent been able to shop there for quite some time. Now I can have a couple of hundred dollars worth of protein etc and I am happy about that. Works out better for them too. Two hundred bucks in their store is not 200 bucks in cash or wholesale. I dont mind, Mirella is lovely, and has been kind and generous, not only to me, but to everyone she meets. If I prefer cash Mirella would give me cash, her heart is golden. 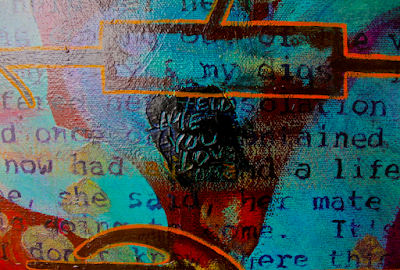 This painting is about desiring love and the kind of love that is strong enough to last forever--if there is such a thing and someone like me could attain that. The hieroglyphs are "One, only" and "To love"

There is some type from a Blue note poster, I think it was of Bill Withers "Lean On Me" song--such a great song and the writing is from my own journal that I typed on a friends computer back in the day when I didnt have one.
Underneath it says "the silence" which is from the Vanity Fair aritcle about Prince, he was on the cover sometime in the 90's and "Insatiable" is a word he had cufflinks made out of and I typeset the word in a nice 60's font. There is more writing scratched into wet paint.
Posted by Ciffyvanlooadoo at 7:23 AM