Dating and the Holidays

Went on a date today. I will be honest. I would not have gone except for the way he presented himself in the initial email. The first line of his profile says he is financially stable. That is nice. I wonder what that feels like, maybe it doenst feel that much different. I would make different decisions. I would be Christmas shopping for one thing. I would be out there finding gifts for my family. Instead I am here writing about a introductory coffee date I went on. I am not going to "make" gifts this year either. I dont know what I am going to do. 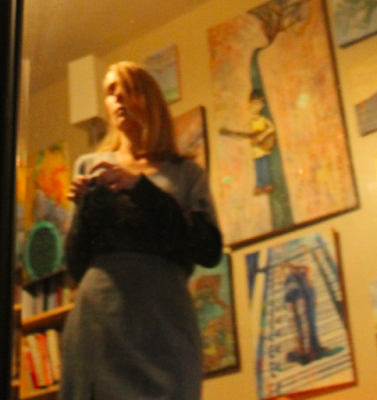 We made a time to meet. I cleaned the house, dusted, vacuumed, did the dishes, cleaned the kitchen. Closed the curtain to my bedroom and went out to meet him dressed for the first time in the vintage Calvin Klein suit Gutuku's mom gave me. I took a bunch of pictures but only got two, not sure what happened :( and they dont have the suit with the jacket on. I wore Gitiku's father's coat that his mom gave me after he passed away. I had nice clothes on. I blew out my hair and put on some make-up.

Two neighbors were at the coffee shop. One of them was there when I was on my first date with the Native guy. He could see this was online date central for me, kind of funny.

We had coffee and then drove back here so I could show him my work. I gave him a little plate of baked goods and he liked them all. He looked around and hummed and hawed. I could feel he didnt want a painting. I did not care, I wanted him to leave. I was not attracted to him that way and he didnt really want a painting, I wanted him to leave. "Thank you for coming, it is time for me to get back to work now."

He told me he wanted to help me out. He told me in the coffee shop he found some glitch in offshore betting on horses and that is how he makes "good money". He is a successful gambler. His son does it too.

When he said he wanted to help me out I told him, "Well since you make your money from a glitch in the computer programming, I will gladly take your help, it is not like you moved rocks around all day for $100, then I would not be quick to take your money."

"Is that what you tell yourself?"

He told me had to use the can again, he used it at the coffee shop. He took awhile there. I had images of him planting a camera or some kind of thing in my bathroom.


He came back upstairs and had a look around. I gave him the price lists. He chose one painting of tulips. Then he asked for a deal. The original price is $225. He said he is trying to "help me out". He found a lucky break, an edge in the system so he makes good money gambling. I am the poor one  and he wants a deal from me.

"Get out of my house" is what I wanted to say but I didnt.

I told him it was a fair price and I am not going to lower it. I told him, "Look you dont need to buy a painting from me, honestly, it is fine. 200 bucks is not going to make or break me, trust me."

He said "Let me give you something" reaching in his back pocket for his wallet. 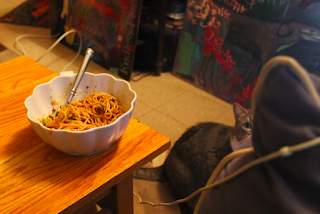 "Or maybe you would like to try my Super Powers Potion?" He told me he thought my skin was good, so good that when he looked at my profile he figured I was running a scam on pof. He thought maybe I was presenting as 57, when actually I was early 40's, 30's to snag the older retired guys. Guys with kids out of the house and time and money to spend on me.

No, that is not happening. I went and got him some cream. I showed him how to use it. He got 3 jars, a lip balm and some cards so he could give some out as Christmas presents.

He started to leave and said something that I could phone him but this was probably it.

"You are not going to be my boyfriend no."

I am glad he is gone. My dinner was good, leftover spaghetti and my cat for company. Now if I only had a few dollah bills yall, so I could shop for Christmas, I want to shop. I dont know what will happen this Christmas.


Posted by Ciffyvanlooadoo at 4:17 PM